“We live in a world of constant and profound transformation, so architects have to radically rethink the way we build … We have to project our ideas far into the future; they need to stand the test of time.” Jean Nouvel, Architect 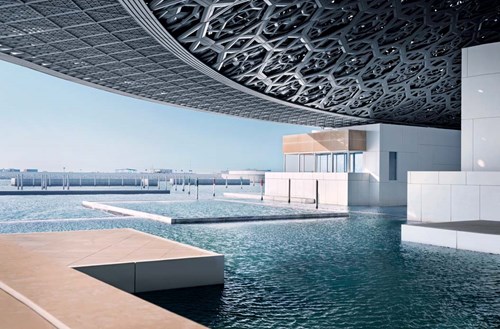 Since the beginning of the Industrial Revolution (about 250 years ago), the Earth’s temperature has risen an estimated 10 times faster than it has at any time in the past two million years. This accelerated global warming is directly related to industry.

Mechanical and technological advancement is the result of human ingenuity – of an inquisitive, explorative nature and a desire to make the world a better place. Human ingenuity has brought unprecedented longevity, knowledge, and comfort. 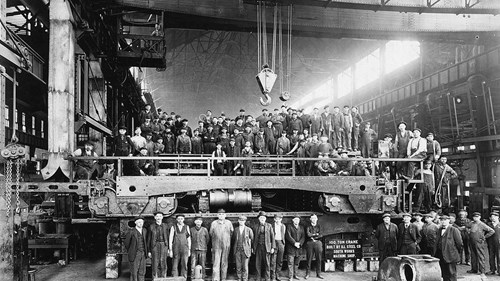 That same ingenuity and compassion is now turning towards reversing some of the harm we’ve caused.

The United Nations Conference on the Human Environment was held in Stockholm, Sweden, in 1972. This summit was the first international step towards reversing anthropogenic damage to the environment, with emphasis on the need for “acceptance of responsibility by citizens and communities and by enterprises and institutions at every level, all sharing equitably in common efforts”.

Twenty years later, in Rio de Janeiro, the United Nations Framework Convention on Climate Change was launched at the United Nations Conference on Environment and Development (aka Earth Summit). The treaty was signed by 154 nations, who committed to “preventing dangerous anthropogenic interference with Earth’s climate system”. 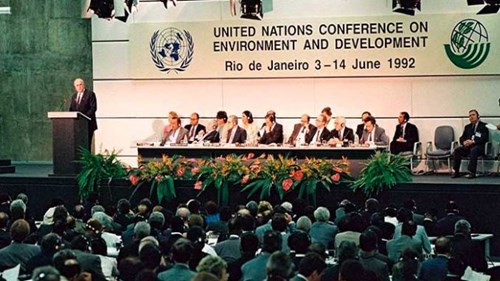 Then came the 2015 Paris Agreement – a legally binding commitment to act against global warming by reducing the concentration of atmospheric greenhouse gases to achieve and maintain a mean global temperature of no more than 1.5°C above pre-industrial levels.

Globally, the buildings and construction sector accounts for almost 40% of energy- and process-related carbon dioxide emissions. So, there’s understandably some scrutiny of the construction industry, with pressure on designers, manufacturers, fabricators, and operators to implement more sustainable practices.

Quality of life for future generations of humans depends not only on thriving biosystems and a stable climate, but also on a healthy economy. And as the economy is the bedfellow of development, to disable one would be to disable the other.

Development, then, must be nurtured. But in order to mitigate ecological damage – or, ideally, to repair some of the damage we’ve done – all development should be sustainable.

The United Nations’ 1987 Brundtland Report (“Our Common Future: Report of the World Commission on Environment and Development”) emphasised a need to integrate economic and ecological considerations in decision making. Sustainable development was defined in the report as “development that meets the needs of the present without compromising the ability of future generations to meet their own needs”.

The concept of merging financial benefit with environmental care is nicely summed up by LEED (Leadership in Energy and Environmental Design), an international green building rating system, whose mantra is “Doing well by doing good”.

Ecological economics is a branch of economics concerned with auditing the economy’s ecological footprint. The total footprint is made up of embodied carbon and operational carbon. 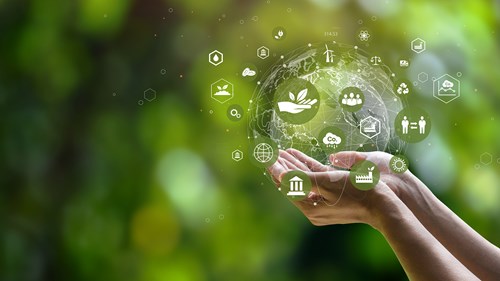 Operational carbon refers to emitted carbon dioxide and other greenhouse gases associated with energy consumed in the running of a business or a building. This would include lighting, air conditioning, heating, technology, cooking, refrigeration, manufacturing equipment, sound systems, maintenance … anything, in fact, that consumes energy.

Embodied carbon refers to the greenhouse gasses released in association with the structure of a building (excluding operations), including extraction and processing of raw materials, manufacture, transportation, assembly, disassembly, and disposal. The Inventory of Carbon and Energy (ICE) database provides unit values for different materials, based on these processes.

Materials play an important part in a building’s carbon footprint. There are lots of considerations:

Wood absorbs and holds carbon until it decomposes or burns. This means that, during a building’s lifetime, its wood components can actually lower the net carbon footprint by sequestering carbon.

Reclaimed timber can be made incredibly strong by cross-lamination – a process that involves gluing together multiple layers of wood in alternating orientation. Recently in the US, several high-rise buildings have been constructed with a framework of cross-laminated reclaimed wood. 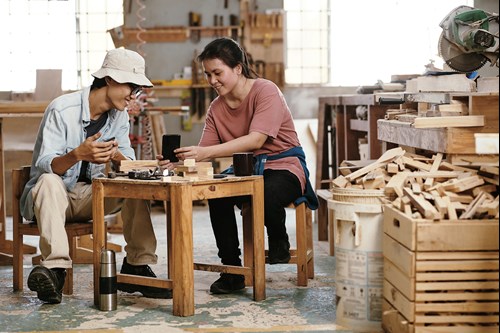 Steel (99% iron, 1% carbon) is made from iron oxide, which is heated to a temperature of 1,700°C to separate the iron from the oxygen. This process produces vast quantities of carbon dioxide. Steel is infinitely recyclable, with no deterioration in quality, and can be relatively easily recovered from refuse by magnetic extraction.

Between 2011 and 2020, Britain’s woodland area increased by 11.7% from 28,650 km2 to 32,000 km2. With increasing demand from businesses and consumers for home-grown wood, the British timber industry is thriving, stimulating economic activity in the forestry and timber-processing sectors.

The growing timber trade is providing additional woodland habitat for Britain’s wildlife. It enables reduced transportation for domestic sales. And, of course, the more woodland, the more sequestered carbon dioxide.

“Subtractive manufacturing” is a term that didn’t exist until around 40 years ago. It was coined in the 1980s to describe traditional methods of manufacture, which involve drilling, carving, whittling, sawing, nailing, welding … processes that take materials away. The term came about as a way to differentiate between traditional manufacturing and the new “additive manufacturing”, also known as 3D printing. 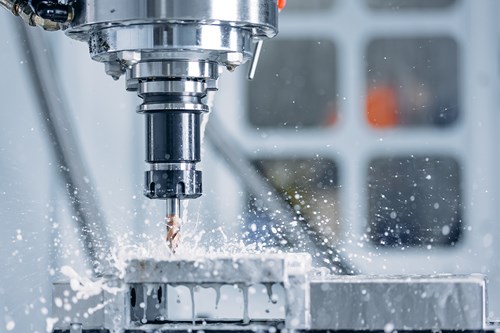 Additive manufacturing originated as a tool for rapid prototyping, but the evolving technology is being adopted within many industry sectors as a viable method of producing low volumes of complex parts. Moved under computer control, an extruder head on the 3D printer adds layer after layer of material to form complex shapes – sometimes integrating multiple parts into a single component, which can simplify assembly. Because additive manufacturing uses material only where needed, incorporating hollow spaces or internal trusses into the design, less waste is produced than with traditional subtractive methods.

Operational costs – in terms of both finance and the environment – can be determined by the designer. A building’s poorly insulated shell, for example, will have a long-term impact on heating costs and the carbon dioxide emissions associated with energy production.

The design of appliances will also impact greatly on the sustainability score of a building or organisation.

The food industry is notorious for wastage. From diseased crops and livestock to contamination and neglect of produce in transit, to loss through poor stock management, an estimated 33% of all food grown for human consumption is wasted. Smart technology, however, helps to reduce waste at every stage of food production.

Farmers are using smart cameras, microphones, motion sensors, and biometric trackers to monitor the health of crops and livestock. Warehouses, retail spaces, and hospitality venues are being furnished with smart freezers, chillers, ovens, and dispense equipment that will collect, analyse, and share data relating not only to the appliance’s primary purpose – such as chilling or heating – but also to stock levels, energy consumption, and patterns of user behaviour. With the ability to monitor parts and subsystems within a machine, maintenance teams can replace a component when needed (rather than on a schedule, which might mean replacing a component earlier than necessary), without increasing the risk of food spoilage. 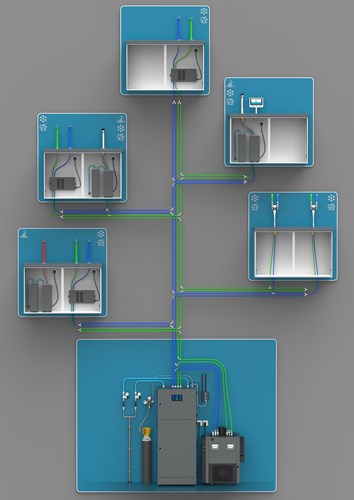 Aqua Link is also a top performer when it comes to energy consumption. The more dispense outlets, the lower the relative cost of any one hydration outlet.

Aqua Alto and Aqua illi are high-performing touch taps that have been designed for low cost and efficiency. Using less energy to operate than any other products of their kind, Alto and illi are capable of dispensing up to 45 litres of filtered chilled, boiling, or sparkling water per hour. 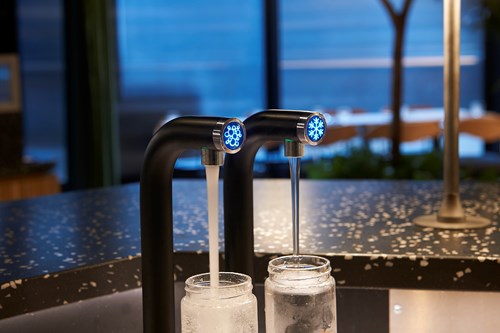 What sets Aqua Libra Co dispense systems apart is their absence of limescale. Through intense filtration, limescale is totally eliminated, meaning that all pipes and tanks are functioning to the highest standard at all times. The deterioration in energy efficiency that comes with limescale just doesn’t apply to these machines.

Aqua Link’s filtration takes place at the point where mains water enters the system, so all pipes from the control unit to the dispense outlets are clean and clear.

Aqua illi, Aqua Alto, and the countertop and undercounter Aqua Bottlers are all high-volume water dispensers that contribute to a reduction in single-use plastic bottles. 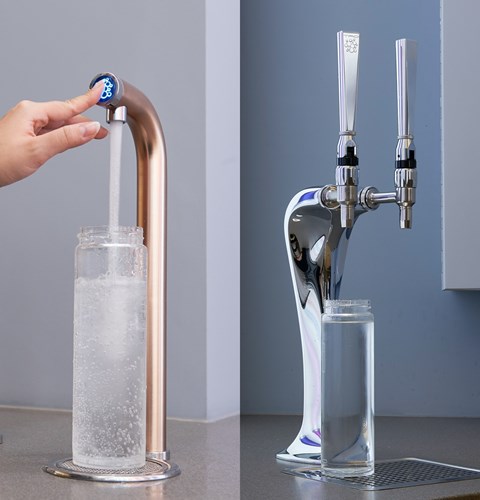 Sometimes, though, we want more than just water – however pure!

So, allow us to introduce the award-winning Flavour Tap.

If you’d like to talk to us about how our energy-efficient, mains-fed water dispensers can help maximise your profit margins and enhance your sustainability credentials, email hello@aqualibra.com or give us a call on 0800 080 6696.